Ethnic cleansing is not legitimized by the Torah 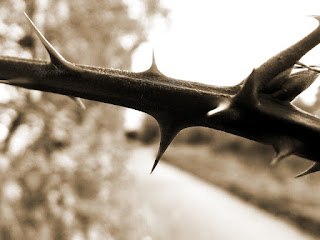 “Spikes in your eyes and thorns in your side” (1) is what the Torah predicts the remaining original inhabitants of the land of Canaan will be to the Israelites if the Israelites do not drive them out as God instructed them to do when they conquer the land. One man recently interpreted this verse in the presence of a few Jewish people, as being instructive for our times. When we heard him say that, quite a few eyes turned to me for a response and I knew that I must examine this verse and find its meanings. I promised to share my thoughts at my Saturday afternoon ‘Shiur’- Torah learning discussion.
Let me be clear that this post is not about what people should or should not do practically. ‘This  (guidance about dealing with the Canaanite population) is an exceptional Divine decree in a particular time and context that no human ruler has the right to apply in any other situation’ (2). Although these actual words were not written by any major classical authority, it reflects a common contemporary attitude of religious Jews. As I explained in my Shiur, no Halachic authority of any standing has advocated for ethnic cleansing or mass expulsions of any population anywhere in over 1000 years and even longer. This post is actually about three things,
1) the attitudes Jews might see as reasonable when confronted with Trump type policies.
2) how people both Jewish or otherwise interpret and understand what I would regard as confronting Jewish texts; and
3) a contribution to general understandings about the various ways people interpret what seem to be simple and shocking sacred texts.
One authoritative classical, 13th century, commentary sees significance in the specific reference to the eyes. “The intention of spikes in your eyes is the same as in the verse “bribery will blind the eyes of the wise”…that (the idol worshipping locals) will cause you to err and you will not see or understand, and they will teach you all of their loathsome  practices and to serve their gods… and as a result of their “being spikes in your eyes” and turning you away from Me [God and ethical monotheism, the Isrealites will be punished by God in that the people would] become thorns in your sides” (3).  While this teaching continues to worry me at a theoretical level, because of its contradiction of pluralism and tolerance, it makes it clear that the context of this verse does not in any way justify building a wall to keep Mexicans out of the US or other exclusionary practices.
I passionately argued against adventurously and literally applying such teachings from another context to situations today.  I don’t know what happens in every Church and Mosque in Australia. This past Sunday, at an Interfaith event, one Christian speaker suggested some texts are just ignored. At a Mosque I recently heard a speaker deliver a lecture that examined teachings of certain Islamic scholars that many in that Muslim community wished to ignore because of the irrelevance of those teachings to their own lives.One thing I think is a safe bet. Making assumptions about sacred texts without understanding the variety of ways that a particular text is read by those who follow it is often misleading.