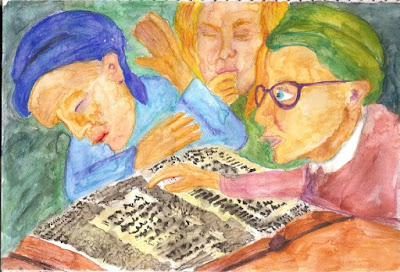 This is not an exploration of the truth about women’s intelligence. As one Chasidic woman stated “I was born into a Chabad-Lubavitch family that never questioned the intellect or ability of a woman[1]”. This is about grappling with traditions that challenge me and my quest to live by the highest standards of modern morality and remain true to the Torah. My other interest in this is that the treatment of women in life and text is often used to put down the other[2].
Exhibit A. “A wise woman asked R. Eliezer. Since, the acts of sinning with the golden calf were equally forbidden, why were the death penalties different? (Some being slaughtered with the sword, some dying by water, or by a plague?[3] He answered) There is no wisdom to the woman but the spindle, as it is written "All the wise women spun with their hands"[4] [5]. 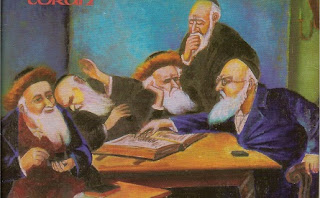 Rivka Slonim, in whose home I spent a delightful Simchat Torah some years ago, wrote; “As I was growing up, there was nothing I felt was beyond my reach, except perhaps synagogue life as enjoyed by the men. This often seemed unfair, but there was an understanding that this was just the way it was... Yes, there were things I wished I could do. But I lived in a world of absolutes, the Torah world. I loved that world and I knew it to be true. If in a world of absolutes there were certain things a woman didn't do... I just wouldn't do them even if I wanted to. They never loomed all-important. The joy and potential for fulfillment in the Chassidic-Jewish lifestyle, coming from knowing who you are and having a sense of direction and purpose in life, was far more significant… I know that after all of the arguments, refutations and debate, something must speak to the soul”[26].

Coming to a similar conclusion via a very different route was the story of Mickey Hirshberg. She was probably the first to establish the radical idea of a women only Minyan (public prayer) in 1971 and pushed many other boundaries, she describes her journey…  “A key transitional experience…a group of Americans would study Chassidut (mystical teachings) one evening a week with a Chassidic rabbi in Mean Shearim. If he had an address we didn’t know it; we knew only which courtyards to cross. He spoke no English and taught quietly and patiently in the simplest Hebrew. One warm evening a friend and I stayed after class to ask questions. His wife appeared with a glass of water which she handed me with a smile. Suddenly I was riveted to the floor. There was something intensely spiritual about the way that woman gave the glass of water. I didn’t want to leave. I wanted to grab her and shake her and beg to tell what the secret was, to say that I had been waiting for years and had to understand. ….I could no longer afford the luxury of alienating Torah-observant and Chasidic women who might bear the keys to locked doors I desired to open”[27].

Clearly there is a disconnect between the simple reading of sacred text and the lived experiences of observant Jewish women today, some of which a reportedly very positive. As a male, is it really my place to argue?


[1] Slonim, R, Chassidic Feminist My Personal Experiences http://www.chabad.org/theJewishWoman/article_cdo/aid/1335/jewish/Chassidic-Feminist.htm
[2] Aly, W (2007) People Like Us. How Arrogance is Dividing Islam and the West. Picador-Pan
[3] Rashi’s explanation
[4] Exodus 35:25
[5] Talmud Yoma 66b, translation is from http://www.jewishvirtuallibrary.org/jsource/Talmud/yoma6.html with modifications where I thought the flavor of the original Aramaic can be better conveyed
[6] Rav Sherira Gaon, cited by Maharatz Chayes, brought in the commentary to Yoma p. 66b3, Schottenstein Edition/Artscroll (1998), ,
[7] R. Eliezer was asked: When the he-goat had become sick, might he be taken on the shoulders? He replied: The he-goat was so healthy that it could bear away you and me together. They asked him again: When the conductor had become sick, may another be appointed? He replied: Let us be healthy; do not ask us about a case of sickness. They asked him again: If after having been pushed down he did not die, shall he go down and kill him? He gave them as answer the verse in Judges v. 31: "Thus may perish all Thy enemies, O Lord."… R. Eliezer was asked whether a certain man would enjoy the world to come. He replied: You inquire of me concerning that man (he named a different man). They asked of him again: May a shepherd rescue a sheep carried away by a lion? He replied: Do you ask me of a sheep? They asked him again: May the shepherd be rescued from the lion's mouth? He answered again: You ask me only of the shepherd. They asked him again: May a bastard be heir of his father? He asked them: May he espouse his dead and childless brother's wife? They asked him: If he possesses a house, must a memorial of the 's destruction be left, when his house is whitewashed (an ell is left bare)? He answered: I think you ask me whether his grave is to be whitewashed? His replies are explained by his unwillingness to speak on matters for which he did have not a tradition, this is followed by the incident with the woman. If the same reason applies to all the cases, it would see that putting the explanation at the very end would be the logical place. Putting the explanation before the case with the woman suggests to me that the reason for this last case might be different.
[8] Jerusalem Talmud Yoma chapter 3:4, Bamidbar Rabba 9
[9] Meiri, Beit Habechira Vol. 4, p 166, Kedem (1978)
[10] Rabbenu Chananel, on Yoma
[11] Jerusalem Talmud, ibid
[12] Talmud Shabbat 33b
[13] A fuller study of the portrayal of converts would be useful. The Torah repeatedly forbids discrimination and mistreatment, of converts or strangers, even verbally, Yet the portrayal of converts while at times glowing and affirming is sometimes quite negative. The attribution of the Golden Calf to the “mixed multitude” that Moses converted is one example. I wonder why we need to the know the name and ancestry of the person responsible for the “leak” from this conversation .
[14] Perhaps also worth taking into account that he made this assessment in a situation where he was in fear for his life.
[15] Zolty, S. P, (1993), And all your children Shall Be learned, Jason Aronson, Northvale NJ, cited in a review by Frankiel, T., in Wellsprings, Winter 1994
[16] Talmud Nida 45b, Bereshit Rabba 18:1
[17] Genesis 2:22
[18] Tosafot Harash on Nida 45b, Etz Yosef on Bereshit Rabba
[19] Sefer Chasidim 313, brought in Torah Shlaima, Vol 23 p. 25 note 90.
[20] R. Israel Meir HaKohen (Kagan), Likkutei Halachot, Sotah 20b: Cited in Levy, B. J., Transforming Women's Torah Learning- A New Wave in Educating Jewish Women,  http://www.chabad.org/theJewishWoman/article_cdo/aid/338925/jewish/Transforming-Womens-Torah-Learning.htm "It seems that all of this [prohibition against women learning Torah] applies only to times past when all daughters lived in their fathers' home and tradition was very strong, assuring that children would pursue their parents' path, as it says, ‘Ask your father and he shall tell you.’ On that basis we could claim that a daughter needn't learn Torah but merely rely on proper parental guidance. But nowadays, in our iniquity, as parental tradition has been seriously weakened and women, moreover, regularly study secular subjects, it is certainly a great mitzvah to teach them Chumash, Prophets and Writings, and rabbinic ethics, such as Pirkei Avot, Menorat Hamaor, and the like, so as to validate our sacred belief; otherwise they may stray totally from God's path and transgress the basic tenets of religion, God forbid."
[21] Prominent in their pursuit of this path is centrist orthodoxy. For fuller explorations of this, see “Torah Study for Women- Rabbi Aharon Lichtenstein”  Reprinted from Ten Da’at Vol. III No. 3 pp.7-8, http://www.lookstein.org/articles/torah_study_for_women.htm
[22] "Al Devar Chiyuv Neshei Yisrael B'Chinukh u-veLimmud ha-Torah 5750 [1990]." Sefer haSichot, Vol. 2 (Brooklyn, N.Y.: Kehot, 1992), pp. 455-459. Cited in Handelman, S. Putting Women in the Picture, adapted from The Chabad Movement in the Twentieth Century, eds.Yitzhak Kraus and MosheHallamish (Ramat-Gan: Bar-Ilan University Press, 2005) with permission of the editors. http://www.chabad.org/theJewishWoman/article_cdo/aid/161694/jewish/Putting-Women-in-the-Picture.htm
[23] Tana Dbei Eliyahu Rabba 9, Remah, Even Ezer end 69
[24] Krengel, S. (1990) Exploring the Hidden, Wellsprings, February-March, p.4 Lubavitch Youth Organization Brooklyn
[25] Schneider, S. http://www.chabad.org/library/article_cdo/aid/2222/jewish/A-Daughter-of-Zelophehad-Speaks.html
[26] Slonim, ibid
[27] Hirshberg, M, (1989), From Feminism to Chasidism, Wellsprings, Av-Elul 5649, August-September, p.17, Lubavitch Youth Organization Brooklyn .


(The large image at the top is a re-imagining of a classic painting that shows a group of male scholars in heated Talmudic debate (smaller image). Hopefully the image and arguments about whether or not it is appropriate will add to the discussion)
Posted by Zalman Kastel at 11:04 PM 6 comments: 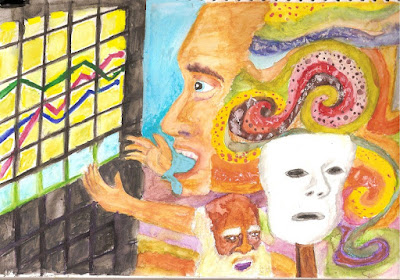 Egypt – what is the right question for a Jew? 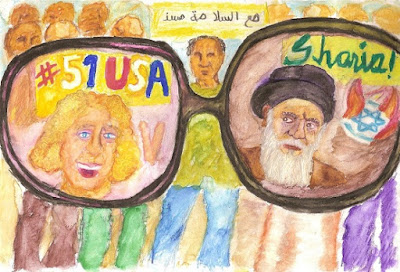