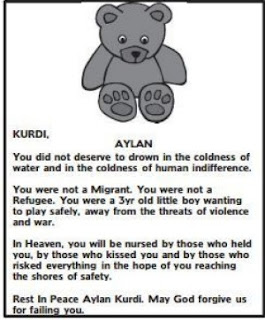 The image of the little boy, Aylan Kurdi, washed up on the beach and his cruel avoidable death calls out accusingly like the blood of the murdered Biblical Abel. God said to Cain “The blood of your brother is screaming to me”. 1 While responding to the immediate catastrophe is vital, we must also consider the factors that are inhibiting a compassionate response. One of these is a sense of that the desperate refugees are the other.

One of the markers of otherness is the belief that ‘the other’ worships a false God. Some people talk about the “Christian God” and how this differs from the “Muslim God Allah”. One man wrote on Facebook, without giving the context 2 of his citation of a fragment of Islamic scripture, “surely those Gods are not the same. One God is said to be about forgiveness and one is about cutting heads!” Religious competition is an old practice. One Torah text talks about ‘making known the difference between the true God who desires loving kindness and the false gods who desire wickedness’. 3

Difference of belief does not need to divide people. This week an Anglican Bishop, a Muslim Sheikh and I chatted and laughed about who is going to hell according to which faith. Yet despite our good time I am concerned that some people who believe that others worship a ‘cruel god’ might not care as much about the suffering of the ‘cruel-god-worshipers’ as they do about people who, like them, are saved and aligned with the good God. Is there a connection between an ‘us and them’ orientation and the fact that Aylan’s death has prompted one politician to comment that this doesn’t happen in Australia because “we stopped the boats”, instead of offering assistance?

Children sometimes ask the Together For Humanity teams of Christians, Muslims and Jews that visit their schools whether we all believe in the same God. I used to think that each of us could say something about our belief in an invisible God-creator who expects us to behave with care toward our fellow humans before the Christian would add something about his belief in Jesus. My incorrect or incomplete understanding of this was that Christians’ belief about God, the creator, was similar to mine but they think that at one point in time this God decided ‘to engage in some sort of “partnership” 4 with a human named Jesus. This simplistic view fails to account for the belief in a trinity beyond the limitations of time that was explained to me by the Bishop this week. Perhaps it is not that easy to answer a simple question about who does or does not believe in the same god.

The Anglican Bishop asserted that the term "Christian God" is wrong. "God does not belong to any religion! We belong to him, not he to us. There is only one God. A term like Christian God can even be idolatry. God is not a thing or a being.  We can have very different understandings about God, like different people might have ways of describing the same distant aunt that are so different from each other, that it sounds like they are talking about different people, although they are actually talking about the same person. And yet maybe sometimes we do get to the point where we are no longer describing the one God differently but in effect now talking about different Gods altogether. Only one of which is real”. 5

In my own tradition there are many references to the God of Israel, God of Abraham or in the ritual of bringing a first fruit offering, we have a formula by which God is referred to by the Israelite farmer as “your God” when speaking to the priest. 6 This does not mean that God is owned by the priest, nor is He owned by Israel, but rather that there is a relationship between the priest, Abraham or Israel with the one unknowable God. 7

Regardless of our beliefs about who is worshiping correctly, we must cross the barriers of “us” and
“them” through the practice of compassion. The horrific images on our computer screens are the living hell that our fellow humans are going through that echo the words of our reading this week: “You will be only wronged and crushed all the days… You will grope at midday, as the blind man gropes in the dark …You will be only oppressed and robbed all the days, and no one will save”. 8 But we can change the last words in the sentence, someone must save! That someone is us.

Notes:
1.    Genesis 4:10
2.    Context was explained in a response by Sheikh Soner Coruhlu “this is in response to those who did their utmost to bring pain and suffering to the newly established Muslim community. They were vulnerable and instead of being nurtured they were tortured, persecuted, starved, and even killed for nothing other than believing in One Deity as opposed to the hundreds the idol worshippers believed in at that time.
It is not unlike Exodus 32:33 where the Almighty decrees quite clearly that He will blot those out who has sinned against Him. The punishment is also mentioned herein.
When we look at the context, we can see in both instances, that punishment is implied to evil doers and those that spread corruption and tyranny on the land. Who take advantage of the poor and destitute, steal what little belongs to the orphans, and indulges oneself in an almost animal like manner in order to satiate their desires even at the pain and suffering of others. Even Muslims fall into the trap of being picky with verses and use such verses with general application. Thus, such individuals partake in what we call selective retrieval in order to implement desired ideologies”.
3.    Rabbi Moshe Dovid Valli, (1696-1777) Mishne Torah page 243 on Deuteronomy 23:16
4.    One word in Jewish traditional sources to make sense of Christian beliefs in a trinity is שיטוף “Shituf” which means partnership
5.    My recollection of a conversation with Bishop Robert Forsyth that was cleared with him in a follow up email on the same day, both on 1 September 2015
6.    Deuteronomy 26:3
7.    Torah Temima on Deuteronomy 26:3
8.    Deuteronomy 28

Posted by Zalman Kastel at 3:30 PM