A Palestinian In The Synagogue - God Cares About “Goyim” 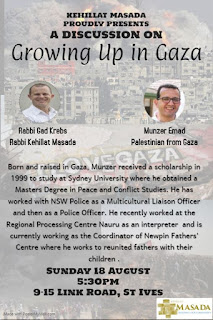 Last night Munzer Emad, a Palestinian man told his story at a Sydney synagogue. I felt grateful to be present, because I this was the first time I had seen this dialogue in a Synagogue in my community in St Ives. Munzer spoke from the heart, and his Jewish audience engaged with his story, despite the fact that “it was very difficult to listen to”, as more than one audience member reflected.

Rabbi Gad Krebs, who initiated this encounter for his community, reflected on his own journey that led to last night. Around the year 2000, the Rabbi, then a much younger man, was, by his own admission, very right wing politically. The Rabbi told us that he was greeted by a stranger with a pronounced Arabic accent, in Hebrew, while watching the Olympics on a big outdoor screen in Sydney’s Darling Harbour. The two men engaged in conversation. The Arabic speaking man initially said he was Egyptian, but later told the Rabbi that if he had told him where he was really from that would have been the end of the conversation. He then shared that he was actually a Palestinian from Gaza, and that previously whenever he had disclosed this fact in a conversation with a Jewish person that ended the conversation. Rabbi Krebs did not run away and instead continued the conversation. The two men lost contact, until a recent chance meeting when Rabbi Krebs and Munzer met, and after a while Gad realised that Munzer was the stranger he met in 2002.

Munzer is a softly spoken man. He argued passionately for connections between people. He argued that, although humans were not meant to fly or swim, we have beaten nature to do both of these things. On the other hand, despite being wired for connectedness, we override our nature in order to be fragmented. He reflected on the way that groups in conflict dismiss each others experiences and deal with the other as an enemy. He shared a surprising anecdote about the time he was around ten years old and Israeli soldiers marched through the street where he was playing; he felt confused and angered by their forceful presence. He threw a soccer ball at an Israeli soldier. The soldier smiled shyly and threw the ball back. A glimpse of the soldiers humanity that did not fit the narrative of this young boy. But a little connection happened anyway.

As a teenager, Munzer was mistaken for one of his brothers who was very active in throwing stones, so Munzer was taken into custody. When Munzer was interrogated, he was blindfolded. He asked his interrogator to remove the blindfold and make eye contact. On Sunday night he got much more than that, his generous spirit was mirrored back to him by his receptive audience.

I don’t think religious texts are key to war or peace, there are other significant drivers that I think are more central, but they are not irrelevant either. The day before Munzer’s talk, I was confronted with a text that seemed to suggest that God does not care about non-Jewish people. Thankfully, there is usually more than one way to read a Torah text.

Moses told the Israelites that “when you look up to the sky, and behold the sun and the moon and the stars ...you must not be lured into ...serving them. These the LORD your God has set aside for all [the other?] nations everywhere under heaven” , but as for you [the Israelites], the LORD took and brought you out of Egypt... to be His very own people (1).

This has been taken to mean that God has set the nations up to worship the stars, and it is only the Jews whose worship is important to God (2). This seems wrong, surely God would not lead people astray (3). As an Assyrian Bishop told me the other night, in his church they don’t pray that God should not lead them into temptation, because surely God would not do that. Instead they pray not to be tested by “trials”.

A story about this text is an early example of the influences of interfaith contact on interpretations of text. A group of Jewish sages were tasked by King Ptolemy to translate the Torah. When they got to this verse they modified the translation to say that God set aside the sun, the moon and the stars to provide light to the nations (4).

Further commentary suggests that the planets are so valuable for all the nations, that they can never be destroyed, and this presents the risk of them being worshipped (5).  Alternatively, the nations of the world might believe in a fragmented concept of the universe, so they see the sun and moon as being more important than earth. However, the Jewish people are invited to think of earth as central, as it is the place where humans worship God (6) and make ethical decisions. Such decisions include to deeply honor and cherish all human beings regardless of ethnic or religious identity. This was the invitation Munzer extended to his audience. It was glorious being part of a room that transcended the divide between the Jewish and Palestinian peoples, and filled with such warmth and goodwill.

Posted by Zalman Kastel at 3:03 PM